Baltimore emerged in 1730 as a small town trading tobacco but quickly became a strategic port, shipping flour to Ireland as well as other European ports, the Caribbean and South America. As the port grew, its trade routes extended to the fertile Ohio Valley. By 1827, Baltimore was the country’s fastest growing city and the largest flour market in the world.

Over the 20th century, Baltimore grew into one of America’s largest cities and one of its most commercially important centers, also leading in manufacturing chrome, copper, and steel products. The Pennsylvania Steel Company developed Sparrow’s point (a large industrial complex) in 1887 – an infrastructure investment that has shaped Baltimore’s economy for more than a century. Baltimore was also perfectly positioned as an industrial transport center, with a major port, railroad access, a nearby airport and well developed highways, the city could ship goods to a third of the United States population overnight. In addition, Baltimore was also a port-of-entry for immigration into the United States which led to a multi-cultural and diverse urban population.

After the end of World War II, Baltimore’s industrial economy began a continual decline and a decrease in the industrial jobs that supported low-skilled workers in the city. Consequently the city began to see a rise in poverty and population loss. A wave of suburbanization in Baltimore lasting several decades saw the city losing an estimated 328,000 residents from its peak population of over 950,000. This migration shrunk the city’s tax base making it difficult to pay for municipal services and provide social support to residents that remained in Baltimore.

To foster growth, Baltimore has focused on growing the service, health and knowledge based sectors which are thriving in the city and providing opportunities to residents. However, the city continues to experience neighborhood degradation, widespread poverty and racial inequality. During Baltimore’s industrial decline, racial discrimination including redlining, predatory lending and divestment from public schools alongside mass incarceration and abusive policing has further entrenched poverty and intergenerational economic disparities for communities of color.

Baltimore’s economic decline has disproportionately impacted communities of color. In order to strengthen the city’s sustainable transition, these inequalities need to be proactively addressed.

Baltimore is seeing increasing threats from a changing climate including extreme temperatures in summer and winter, storm water challenges and negative health and safety impacts on local residents.

Today, Baltimore perceives itself at a moment of transition towards a healed economic, environmental and social fabric. Anchor institutions in higher education and healthcare are rising in importance, fueling the growth of a vibrant “eds and meds” economy. The efforts around greening and building a more sustainable city have led to the creation of the Baltimore Office of Sustainability in 2007. The Office advocates for a healthy, resilient Baltimore and offers innovative, sustainable solutions while engaging people throughout the city, region, and country. Despite valuable successes, climate change is becoming an increasing threat, and many socioeconomic and public health challenges persist. 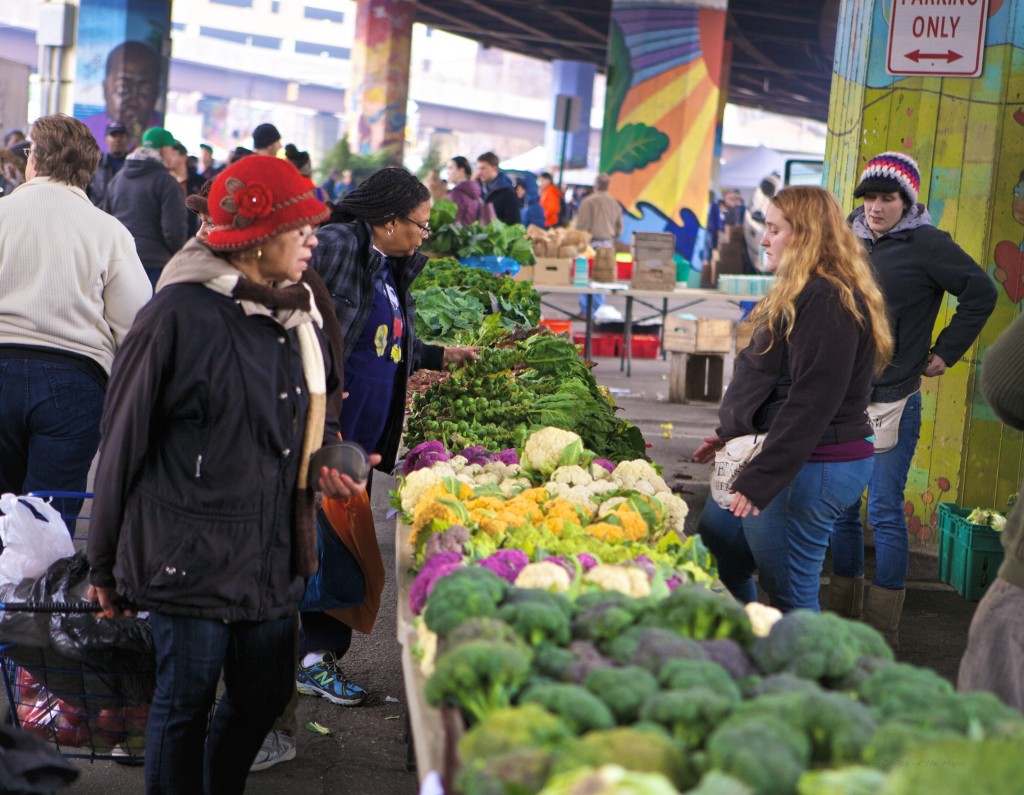 With the 2019 Sustainability Plan update, the city aims to institutionalize issues of equity into the core workings of city government planning and implementation. The plan had a strong bottom-up community participation component by empowering neighborhood ambassadors to gather ideas and feedback from local residents. Another key strategy for the city is the upcoming Green Network Plan. This projects aims to transform vacant lots and open areas in Baltimore’s under-resourced neighborhoods into green spaces. These spaces will increase inhabitants’ access to a variety of natural resources and recreation whilst also revitalizing neighborhoods. Investment in these neighborhoods will help to improve health and wellbeing and improve storm water management but also provide an opportunity to address long-standing disparities by increasing equal access to green amenities.

Another initiative in Baltimore’s transition towards a sustainable future is the Baltimore Food Policy Initiative (BFPI). Founded in 2010, the initiative aims to ‘improve health incomes by increasing access to healthy affordable food in Baltimore City’s food deserts’. In 2017 a cohort of Baltimore’s residents formed the Resident Food Equity Advisors. This group of 16 advisors, representing all city council districts, has been working with the city to share knowledge, lived experiences and provide a community voice that helps to inform and advice Baltimore’s Food Retail, Sustainability and Food Resilience Plans and policies. A focus has been placed providing support and guidance to corner stores to make them be more accountable and stock a larger variety of healthy food options.