The transformation of Beijing Economic-Technological Development Area (BDA) from an agricultural area into an urban-industrial hub began only in 1992, making BDA the youngest member of the Urban Transitions Alliance. Located in the southern region of the Beijing Municipality, the 58 km² area is the only national level economic and technological development zone in the province. BDA’s industry is based on four pillars: information and communication technology, bio-engineering and new medicine, automobiles, and equipment manufacturing. Over the past 25 years, BDA has attracted growing international investment and today hosts nearly 4000 companies from 30 countries, including several Fortune Top-500 enterprises and well-known multinational corporations.

Beijing Economic-Technological Development Area, while still experiencing a surge in industrial growth across all sectors, is fully aware of the global need to shift towards more sustainable industrial practices and away from energy-intensive, low-value manufacturing. BDA has therefore placed its interest in advanced high-tech industries that will provide long-term growth opportunities for the area. The urban development is also known to have a considerably young and educated population eager to pursue entrepreneurship and knowledge opportunities.

Industrial development thus far, however, has led to rapidly worsening air quality and environmental challenges. Fast-paced construction of the development has created large quantities of construction dust and unhealthy levels of particle pollution in the air. BDA is also facing resource shortages including water, land and energy which have placed further pressure on finding more sustainable and resource-efficient methods of production and consumption.

From the perspective of urban residents, BDA has not been able to expand utilities and social services fast enough to meet the growing population’s needs. Traffic congestion and limited mobility choices are also starting to emerge as core challenges that need urgent attention.

Despite economic growth and environmental progress, social services do not meet the high standards and infrastructure required by residents.

The area will need to find a strategy to retain its industrial attractiveness and competitiveness to attract companies while accelerating its sustainable transition. 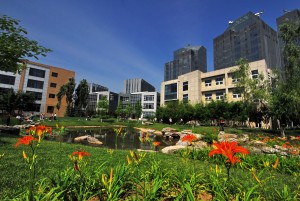 Taking the next steps towards its urban transition, BDA plans to integrate the area’s water flows by combining tap water, rain water, underground water, sewage water and already recycled water into a single system in order to improve cyclical water utilization and limit waste. The development area has a 100% sewage water treatment rate and reclaimed water use is currently 30% of total water consumption.

BDA has prioritized Research and Development (R&D) and innovation promotion by becoming a destination for talented overseas students and practitioners. BDA plans to provide incentives and favorable business conditions to enable these individuals to start businesses or contribute to achievements in their field. The City has also set up a financing platform through a stated-owned investment and financing company called “Beijing E-Town International Investment & Development Co., Ltd (E-Town Capital)” incorporated in February 2009. By the end of 2017, E-Town Capital had invested in over 116 projects, with a total investment of 35.4 billion yuan. Its parent fund system owns 55 funds that have a total size of more than 240 billion yuan (36 billion USD).

The City has committed to a regionally integrated approach to development and industrialization. The manufacturing of certain electronic consumer products, printing, machinery and chemical industries are planned to phase out to make space for high-tech manufacturing which has stronger future prospects and demand. Through the next few years of urban transition, BDA is also committed to finding a balance between industrial development and sustainable living. Decentralized housing, public transport and service infrastructures are inclined to reduce commuting and improve efficiency. Through green development principles, surrounding areas are reintegrated and upgraded. Additional green belts and ecological corridors along riversides will increase the accessibility of green spaces for citizens. BDA’s goal of becoming a sustainable city includes plans for improved health, education, culture, sports and public service facilities for its residents.