With a population of 594,000, the City of Essen is located along the Ruhr river in a central part of the Ruhr metropolitan region, the third largest conurbation in Europe which is home to 5.1 million people. An integral part of the region, Essen’s identity is rooted in its heritage as a coal and steel city. From the early years of the 19th century, massive coal mining and steel production fueled rapid economic growth, turning the Ruhr Region into Germany’s industrial heart.

Rising labor demand instigated an enormous population influx, in turn boosting further sectors including building and textiles. During the post-war economic boom, the Ruhr Region was home to more than 500.000 miners. Accelerating growth patterns turned when over the 1960s, the local coal industry lost its global competitiveness. Enduring industrial decline and cross-sectoral unemployment plunged the region into an ongoing crisis which compelled Essen to undergo a structural shift. Facing a new era with changing technical and ecological conditions, the city found itself on a transition path towards a service economy with an increasing share of small and medium-sized businesses. Essen’s last colliery closed in 1986.

Rapid industrialization had devastated the city’s environmental quality and natural resources, most visibly in the northern parts of the city, and left behind a legacy of air and water pollution. Residents commonly found their washing, that was left out to dry, covered in coal dust from the furnaces and ovens. With the urban density of the area exploding, the rivers Ruhr and Emscher became highly contaminated by industrial sewage and household wastewater. Extensive mining also impacted groundwater levels and flows, causing the permanent need to pump groundwater throughout the region and remove the contaminated water accumulating in abandoned shafts.

From 1968, joint municipal, state and government programs shifted from passive crisis management to active restructuring and modernization of the Ruhr Region. The renowned “Strukturwandel” structural change approach focused not only on new production methods and employment strategies, but took a more comprehensive view on resident’s needs. The transformation of the region included: investments in education; transport infrastructure and environmental protection programs; recreation and urban renewal projects. Between 1989 and 1999, the International Building Exhibition Emscher Park (IBA) continued to develop and implement cutting-edge initiatives for the ecological, economic and social renewal.

Essen’s industrial heritage is still very tangible: The city’s architecture is shaped by dozens of smokestack landmarks, especially the famous shaft tower of coal mine turned into the Zollverein UNESCO world heritage site. Miner’s slang like the below-ground greeting “Glück auf!” has been adopted as everyday language. Looking to the future, Essen is crafting its identity on diverse pillars such as a leading conference location, shopping city, university hub and most recently a cultural and green capital in Europe.

Throughout Essen’s industrial pinicle and subsequent crisis, economic and infrastructure inequalities arose. Future focus will need to be placed on improving former miners’ neighborhoods in the north of the city.

Long-lasting high unemployment numbers and huge structural change investments have led to high public indebtedness. While now economically stable, Essen is still amongst the most financially-strained municipalities in Germany.

In 1961 the future German chancellor Willy Brandt demanded that the sky above the Ruhr must turn blue again. Since then, the city has undergone a remarkable transition. Essen’s economy has developed into a service and financial centre for the region. The high concentration of jobs brings around 140,000 commuters into the city every day. Essen’s transition actions have focused on spatial redevelopment and nature restoration: Throughout the city, intelligent repurposing of disused land has increased the percentage of open spaces to 54% of the municipal area, enhancing local biodiversity. Urban development projects like the “Krupp belt” incorporate climate change adaptation and mitigation: 230 hectares of industrial wasteland has been transformed into sustainable living, office, culture and recreation space following energy efficiency and blue and green infrastructure principles.

Early on in the transition process, the 53 towns of the Ruhr Metropolis recognized that they can only master their challenges together. Founded in 1899, the water management association “Emschergenossenschaft” regulates the industrial impacts on the Emscher river ecosystem and streamflow. In addition, the Ruhr Regional Association has designed regional concepts for spatial planning, infrastructure and conservation since 1920. 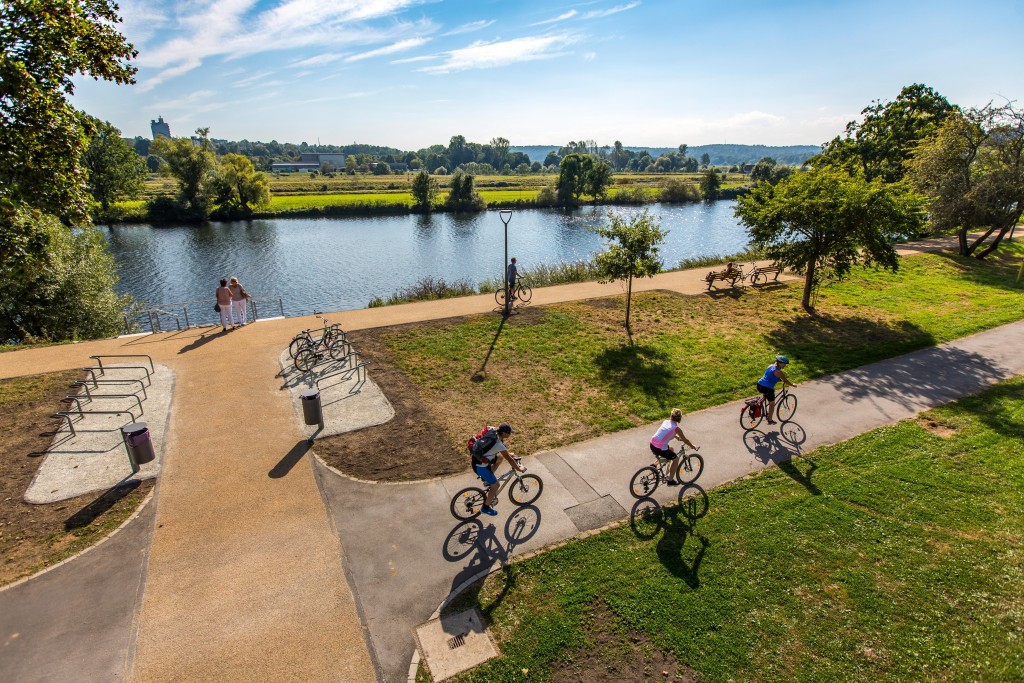 In recent years, nature and land restoration programs have accelerated the environmental recovery of the region. Following multiple emission restrictions and clean air plans, air quality has improved significantly. The ongoing conversion on the river Emscher has shown positive impacts on the river’s ecosystem and surrounding landscape. After being prohibited for 46 years due to water contamination, parts of the river reopened for swimming in 2017. Innovation, education and climate protection plans from the state government initiative “KlimaExpo.NRW” further strengthen regional cooperation on sustainable development.

Essen’s sustainability transition has been a remarkable success, culminating in the title of “European Green Capital 2017”. Throughout the Green Capital year, the city has presented itself as model for structural change and realized numerous green awareness projects and events. Moving into into its “Green Decade” until the 2027 International Garden Exhibition in the Ruhr Metropolis, Essen strives to steady the citizen involvement and expand international cooperation. Yet, demanding tasks remain. Continued social and economic progress is equally as important as are fundamental changes in transport and traffic. To achieve these ambitious goals, the combined action of local and regional actors will continue to play a vital part.