LISTEN TO THE PEOPLE

ADDRESSING INEQUALITY IN GLASGOW FROM THE GROUND UP

WHAT IF GLASGOW HAD LESS PUDDLES?

Imagine being a child living in a rainy city and you only have two pairs of shoes – your school shoes, and your play shoes. If the play shoes get wet, you can’t go out to play. Would that make you feel angry? Sad? Would it make you want to get rid of all the puddles that get your shoes wet?

That was the answer given by little Jordan, a child from Glasgow, UK, whose story inspired the local road service to fix a drainage problem outside the park he used to play in.

While it has a strong industrial past, today, Glasgow is a hub for science and innovation, and the city’s vision is focused on residents and social equity. Glasgow has the most diverse population in Scotland, 3500 hectares of green space, and a 3.4 percent yearly increase in employment levels. According to Michael Ward, Planning Manager at Glasgow’s Development and Regeneration Services department,  the city is “focused on economic growth, closing the inequality gap, and tackling poverty.” To achieve that vision, however, Glasgow has to deal with a past that has not always been so kind towards Glaswegians.

Glasgow was one of the foremost cities of the global industrial revolution. A successful trading center, the city became the 4th most populous city in Europe and an important shipbuilding area in the 20th century, launching one-fifth of the world’s commercial ships.

However, in the post-war period, Glasgow suffered twin-shocks: industry and population losses. Responding to the economic challenges of the 1950s and 1960s, Glasgow tried to redevelop through major projects such as the Comprehensive Redevelopment Plan and the Glasgow Highway Plan. While the former focused on demolition and clearance of slum houses, the latter built a motorway straight through the heart of the city. Both such ‘helicopter projects’ looked good on paper, ‘from above’, but failed in practice. The clearing of buildings disrupted communities and moved people away from their social connections.

Initiatives designed to eliminate slums ended up creating new ones, which added to the legacy of challenges already present: pollution, degradation, and abandonment.

LISTEN TO THE PEOPLE

In the early 2000s, Glasgow established the Glasgow Centre for Population Health to pilot a Health Impact Assessment, a set of procedures, methods, and tools by which an initiative can be judged by its potential effects on the population health and the distribution of such effects.

Residents were invited to photograph and document their daily lives in their neighborhoods. What emerged was a photo collection of abandonment, rubbish, and crime, representing the residents’ feelings of abandonment, and sadness.

Community members were then asked simple questions, such as “if you were in charge and had the money, what would you change?”

We know how little Jordan replied, and how his input helped to fix the play park’s drainage problem.

This method of giving communities a voice to assess the quality of a place is codified in Scotland as the Place Standard Tool, a simple framework to structure and guide conversations about the physical elements of a place (ie. its buildings, spaces, and transport connections) as well as the social aspects (ie. whether people feel they have a say in decision making).

Users are simply asked to answer a set of questions with a rating from 1 to 7, where 1 means there is a lot of room for improvement and 7 means the quality of that element is as good as it can be. The ratings on the resulting compass form a ‘spider’ diagram that visually includes all the answers – namely, assets and shortcomings of any given place. 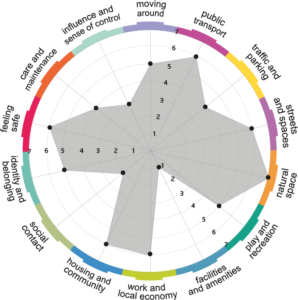 Designed as a way to gain community input, the Place Standard Tool produces such a wealth of information that it has become valuable to a wide range of service providers across the public, private, and voluntary sectors.

The tool offers particularly high value for a city like Glasgow, where half of the population still lives in proximity to derelict land, the violent crime rate is twice as much as the national average, and life expectancy differs by more than 14 years based on location. When tackling inequality at the ground level, the Place Standard Tool not only builds engagement, but sources invaluable information from communities that are often not consulted in planning processes.

Yet the most important aspect of this tool goes beyond development planning: the conversations it triggers among people seem to inspire a deeper feeling of belonging and of community, going as far as to strengthen a sense of identity and purpose.

Glasgow’s journey has not only been a process of renovating places in decay. It has enabled people to feel better, improve their quality of life, and created a legacy of people-led development. Indeed, thanks to that initiative, little Jordan grew more confident and was not afraid to talk to other council officers about the needs of children in his neighborhood.